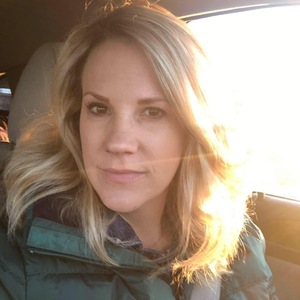 Today started like most of the days the past few weeks: making bottles for two calves we were nursing back to life.

As I approached the pen this morning, I could tell that things were looking grim for one of our little friends. It was obvious that death would be imminent for him today. "This isn’t how the day is supposed to start", I told myself. "I am nursing him back to life, not assisting him to his death".’ I left the morning feeding attempt with an empty bottle in one hand and a full bottle in the other. He was too weak to eat and was barely holding on.

I had some errands to run but when I returned home, I couldn’t stand the thought of this little guy being alone. So, there I sat for an hour or so with my podcast playing as I offered what little bit of moral support I could to this dying animal. I felt somewhat silly sitting there as one part of me was saying it is just an animal, but the compassionate part of me just couldn’t let go.

There were many disruptions: dogs coming down to the pen, kids squealing in the background and curiously making their way down to see if death had indeed claimed him. I finally had to suggest that we all just walked away so that he could die in peace and quit being startled back to life by their questions, remarks, and movements.

So, we walked away.

After I fed the kids lunch, I couldn’t help but feel like there was more I could do for this little guy. In fact, he was so little that we named him Junior. Again I made a bottle, but this time I got a bowl and a syringe. I walked down to the pen half expecting to find him void of breath, yet hopeful that my last-ditch efforts would provide a miracle. I sat there and fed him what would later prove to be his last supper. Syringe by syringe, I filled up the tiny tube and watched him muster up every bit of energy he could to swallow. I felt somewhat accomplished and yet again walked away.

About an hour later, Tugg threw on his boots to go check out the situation. He came back with a matter of fact, quiet statement of "he’s dead". And as much as I wanted to go look, I trusted him.

So, while I did not see death today, I surely felt it.

The afternoon carried on as normal yet I had this feeling of sadness that I just couldn’t shake. I decided that I needed a change of scenery and drove to my classroom, by myself, to get some things done that had been on my mind.

This would prove to be a painful choice as not only did I feel death today, I saw it too.

Walking into a classroom that is void of life, for a teacher, is a lot like staring death in the face.

While I have felt the sting and pain of an empty schoolroom, this feeling was very different. The final bell ringing on the last day of school proves to deliver a level of sadness to the heart that is hard to explain. One chapter is closing, yet there’s a feeling of joy along with it because of what is to come. There is hope in the future. But walking back into a classroom that looks as if kids had been there the day prior, it feels a lot like death when you know good and well it has simply been abandoned.

Today I made the decision to pack up my classroom. It didn’t come from an order, but rather a leading. It was the same feeling I felt earlier today: the reality of facing what was to come.

I erased the date off of the board: March 12, 2020. This was the last day of ‘normal’ this classroom had seen and in reality, it could be the last bit of life it will see until really who knows when. As I packed things up, cleared bulletin boards, tidied desks, and wiped the boards clean I couldn’t help but feel that another feeling I had felt earlier: a death to what could have been.

There were many more standards to be checked off the list, birthday songs to be sung, chairs to stack, whiteboards to be filled, words to be read, and high-fives to be given. Why? Why is this our reality? That I cannot comprehend, but as obedient citizens, here we are in this situation. This empty, lonely, helpless situation.

I turned to leave my classroom and the image I saw struck me. I saw a blank slate of what felt a lot like death; so much potential that was cut short and slipped right through my fingers. Yet in the corner, standing tall, was the American flag which felt like a familiar chance at life.

It was all that was remained that had meaning or even offered a glimmer of hope.

While I know that many would beg to differ with me right now, I do still believe our flag stands for freedom. A freedom that will be restored to what it once was.

We, as American’s, are in a stage of mourning the ‘what could have been’ for our country. The 'coulda, shoulda, woulda' stage. The stage that doesn’t really do any good. Kind of like me feeding the calf one last time less than an hour before his death. I did it selfishly for my own benefit so that I could rest easy knowing I did all I could do.

We are all facing grave times and even though the future looks bleak and uncertain and feels a lot like we are assisting in the death of our world, rather than nursing it back to life, we all have that feeling of 'there is so much more we can do’. However, sometimes the doing is in obedience found in the waiting. Maybe we all just need to come together to pledge our allegiance and watch old glory fly; do her thing, like she always does.

I know there will be a time again that my classroom walls are purposed once more to provide anchor charts, inspirational quotes, birthday banners, lunch menus, and days of the week. But until that time comes, I will walk away with hope in my heart.

Starting a New Business While Welcoming a New Baby?

How To Start a Business as a Stay-at-Home Mom: Tips for Success