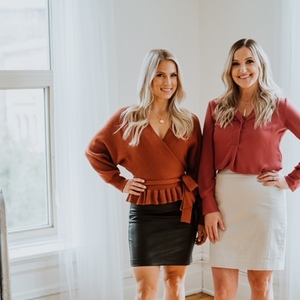 The day I found out I was pregnant, I put myself on daycare waitlists. Now this may sound a little insane, but EVERYONE told me to do it. It is extremely difficult to get a spot for a daycare center in Winnipeg, so I put our names on waitlists for both centers and homes.

When Mason was four months old, we had an interview at a home daycare that checked all the boxes. It was close to home, they didn’t have a lot of kids, and they seemed wonderful. At the interview, I had my list of 30 some-odd questions and both my husband and I felt super comfortable with the answers provided. After some reference checking, we put a deposit down to secure the spot. I was so relieved! One less thing to worry about throughout the year.

Fast forward to the month before I returned to work. The daycare provider and I had talked about doing a four week transition plan to get Mason adjusted to daycare. I was very happy with this approach as I didn’t want to be dropping him off at daycare for the first time on my first day back. We brought him to the daycare the day before he started so he could have exposure to the home and provider. Day one the plan was for him to go to daycare for two hours. Of course I was an inconsolable mess at drop off and he was hysterical when I dropped him off, but I received a text with a photo saying he was doing ok within about 30 minutes. When I picked him up, I was told he did pretty good for his first day. Phew! All in all I would say day one was a success.

Day two; same thing…lots of tears at drop off. But once again, I received a text and photo saying he was ok but he really wanted to be held most of the time. Mason is a very sensitive and loving little boy. He is my little snuggle bug! And you can imagine how overwhelming it is for a baby to adjust to daycare and being away from mommy and daddy. So I was not surprised he wanted to be held. The daycare had asked if we picked him up a lot, and the answer was absolutely we do! He wasn’t walking yet, and when he fusses or cries, he typically crawls to us and wants comfort, so of course we give it to him. She recommended we try to pick him up a little less, rather to get down on his level and hug him and then try to divert his attention to a toy or something that will make him happy. My husband and I were willing to take the advice and do what we needed to help Mase adjust to daycare. After all, they are the ones with years of experience!

Fast forward to week two and his third day at daycare. He had been there for about four hours and I received a text saying he had had enough for the day. The text went on to say that he was refusing to play with the other kids and would only stop crying if he was carried around. I was told he was having a tantrum and would wake up the other kids so I needed to pick him up. Ok…I was kind of taken aback by all of this. I mean…he’s a baby. He doesn’t really know how to play with other kids. And I know everyone says this about their kids BUT…Mason does not throw tantrums. He is a super chill and happy baby. Sure he has his moments, but not “freak out” moments. I decided to write it off as a bad day and we’d try again.

Day four. He hadn't even been there for three hours when I received an extremely long and what I would say, inappropriate text explaining that he needed to be picked up now because he was having an ongoing tantrum and they were “refusing” to pick him up. I ran over there and when I got to the door, Mason was in tears. My poor little babe's eyes were so red you could tell he had been crying nonstop. My heart was aching. Seeing him that upset killed me. I understand Mason cannot be carried around 24/7. But as he’s transitioning and learning to adjust, I would expect for someone to sit with him on the floor and play with him. Let him crawl to you and feel secure. At least for the first little while. At the end of the day, it was not the right fit for us. When I came home I called my husband and told him Mason would not be returning to that daycare. My husband agreed and so we were on the hunt for a new provider as I started work in a week and a half.

Thankfully, I have some amazing mommy friends who quickly came to my aid in providing their home daycare names and phone numbers. I should mention, at this time, I had been on daycare wait lists for 20 months and still hadn’t received a single call. I tried to reach out to a few centers, but none of them had spots. Luckily, within 24 hours, I had four daycare interviews scheduled. I was very optimistic that we would find a good one despite my apprehension from our experience.

Our first daycare meeting went really well! We immediately felt at ease with her and watching the way she interacted with Mason made me so happy. This was a referral from a friend of mine who used the phrase “We love our daycare lady” to me several times. But, we wanted to do our due diligence and meet with the others to ensure we were making the best decision for Mason. After all our meetings, we decided to go with the first one. He would start daycare the Friday before I returned to work. This was less than ideal, but he would go for two hours on Friday, my husband would stay home Monday and take him to daycare for a half day, and if need be, I would take a half day on Tuesday.

Of course he cried at drop off. But within 40 minutes of him being there, I received two texts and a video of him playing and smiling. When I picked him up, I could see that he was ok. She told me he was ok as long as he knew where she was. She sat on the floor and played with him, let him crawl to her, and I even got a video of him passing a toy back and forth to another little boy. I was so happy and relieved! On Monday (day two at the new daycare), the plan was to have my husband pick him up before his nap, but he was having such a good morning that we decided to keep him there a little longer.

Again throughout the day, I received texts and videos and honestly, I can’t tell you how much weight was lifted off my chest knowing he is in the right place. Again, he still cries at drop off and throughout the day at daycare a little, but I know he’s being comforted in the way that he needs.

So why did I share this long winded daycare experience with you?

As parents, it’s our job to advocate for our children. It’s our responsibility to make the decisions that we feel are best for them. I knew in my gut when I picked him up that day that this was not the right place for him, and I am so happy that we made the change. I believe in my heart and soul, we made the right decision to pull Mason from that daycare.

I had completely different expectations of the care and attention he would get as an infant. Maybe if he was older and more independent, we wouldn’t have had any issues.

In my opinion, daycare should be an extension of home. Let’s be honest, there is no one on this earth who will give your child more love and attention than mommy and daddy. However, daycare should be a safe space where if your child feels scared and alone, they are comforted the way that they need. I am so happy that Mason is in a place where both my husband and I feel comfortable, and Mason is as well.

Thank you for taking the time to read this! I would love to hear about your experiences with daycare.

Caring For Children With Disabilities: A Parent's Guide