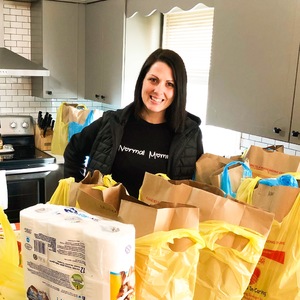 I started out my journey of motherhood like most first time moms. I only ate the healthiest of things while pregnant to ensure my baby would be as healthy as she could be. This thought continued through breast feeding too. I would take into consideration everything I would put into my mouth and think about what it might do to my milk and my child. As my daughter grew up and started to eat table food, I wanted only the best for her. I made sure these products were organic and minimally processed. I would take the time to make her baby food from scratch.

Fast forward a few years and two children, I lost sense of who this first-time mommy was. I still make the best decisions for my family when grocery shopping and our home contains the healthiest food possible, but I have at times fallen victim to buying things I know I shouldn’t. My daughter began school and started to notice things her friends would be eating. She would ask me to please let her bring the snacks her friend had to school. I of course wanted to make her happy, so I bought it. There have also been times when tv commercials have played a huge role in our purchases. These commercials really make children wish for something like a yummy cereal with marshmallows or a special cookie for the holidays. In moderation these things are fine, and for most children completely acceptable, but for my daughter this was not the case. We started to notice a major change around Halloween time. There had been many fun parties in the fall that had carried into the Halloween holiday. The treats became more frequent and so had our daughter’s tantrums. These tantrums were not that of a normal four-year-old, they were so much worse. We noticed something was wrong, but we just couldn’t place what it could be.

There had been so many behavioral issues that continued to worsen and cause problems with normal every day activities such as school. We worked together with her teachers, and even doctors to try and figure out what was wrong with our sweet daughter. We knew something was bothering her, but as her parents we just couldn’t figure it out. We spent weeks which turned into months trying to solve the growing issue with our daughter. All along never realizing that when we were rewarding her good behavior, she was choosing MM candy or that her favorite cereal was full of red dye food color, which was the issue. It didn’t hit me until our recent trip to Disney that our daughter’s behavior was no longer in her control after her cotton candy treat. I watched her completely spin out of control and tell me “Mommy I can’t stop myself”. When we came home, I met with my daughters’ teachers and they mentioned that they went to a speaking event on children’s behaviors being linked to additives in food. I was in shock to hear this because it was the realization I had just come to days before. I knew my mother’s intuition was onto something and I had to do more research. I went home that night and investigated food dye and children’s behavior. The connections were astounding to me. I read articles about other children and the experiences the parents had and could not believe how similar our situation was. I was relieved that after months of thinking it could be something medical, I realized it probably was not. My daughter cannot tolerate food dyes.

I spent a few hours cleaning out our pantry and refrigerator removing any product(s) that had food dyes in them. They can be in anything, so I needed to read labels carefully. After just a few short days the change in my daughter was drastic. She was happy again, not angry anymore. Her tantrums have lessened to practically nothing. If she has a tantrum it is one of a normal four-year-old girl. During Christmas I made homemade cookies and let our daughter have some. My husband and I questioned if sugar bothered her or if it were truly the food dyes. The sugar did nothing to her behavior at all. We have tested our “diagnosis” so to speak by giving our daughter a product containing different food dyes and sure enough within a short period of time her behavior was out of her control. We do know which dyes are worse for her, Red dye 40, Yellow 5, Yellow 6, or Blue 1. Our pantry may have lost its color, but our home has gained so much happiness. I have found so many amazing cereal and treat alternatives. Our family hasn’t seemed to mind the change. If you have any questions or would like some advice on making this color change, I would love to talk to you!

Hi everyone! I’m a stay at home mom of two girls, Sophia and Priscilla. I turned my love of cooking, fashion, and being an every day “normal mommy” into an amazing life of blogging and influencing all things awesome. I live in New England with my husband in an adorable suburbia town and look forward to sharing our family’s adventures with you!

Caring For Children With Disabilities: A Parent's Guide