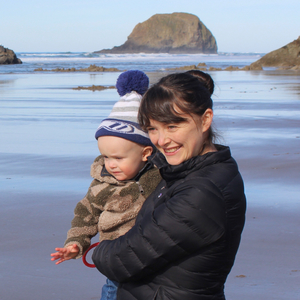 I'm going to begin by acknowledging, up front, that many mothers do not have a choice when it comes to working outside the home. Many mothers are the breadwinners of their families, they are the economic backbone of the household and they either need to, or choose to, work to support their loved ones. I see you working moms, pushing through long hours, juggling multiple jobs, and providing for your children. You are slaying this motherhood gig.

As for me, I am a Stay At Home Mom (SAHM). I chose this path because financially we were able to make it work, and with childcare being as expensive as it is, it just made sense for our small family that I be with our son full-time. The first three months of his life, the idea of working at all seemed like a complete joke. I was getting no sleep, I was struggling to meet the needs of my breastfeeding infant, while trying to remember that I had to eat and maybe shower once a week. Knowing that many of my other new mom friends were having to return to the office after the fourth trimester seemed insane to me. Our system for maternity leave is a joke, ladies... but that's another post.

As the months passed and I started settling into the 'new normal' of motherhood it became pretty clear that I was lacking something. I enjoyed being a mom, I enjoyed caring for my son, and I found the challenges of motherhood both enthralling and frustrating. The role of a SAHM was something a lot different than it looked on paper. Your triumphs, your tribulations, your everything happens in the tiny microcosm that is your house, peppered here and there by the occasional playdate or child-centered activity. The only time I was getting for myself was after I put my son down, and by that time I was too tired to do the things I really wanted to do because I still had to pick up the house and make myself something to eat. By the time I had eaten, the only energy I had left was spent flopping on the couch, watching a show, and then heading to bed knowing I would be (and still am) getting up multiple times in the night.

I started asking myself: if a child poops in the bathtub, or squeezes an entire pouch of prunes onto a dog, and no one is there to see it, except a SAHM, did it even really happen?

I used to work in a small, popular, highly regarded tiki bar in Portland, OR. Before moving to Portland, I worked in a high-end cocktail bar in Seattle known around the world for its drinks and service. The service industry is not always glamorous, there are extremely long hours, you're on your feet the entire time, and customers can be incredibly difficult. However, the beauty of the service industry IS all the people. If you're a people person, if you enjoy a quick conversation, a heavy helping of charm, and a whole bunch of laughter, then depending on where you work, the service industry can be a wonderful conduit for your personality. I am an extrovert in most things, and I've always been fond of the challenges of serving on a busy night. Nothing nearly that fast-paced happens in my daily life of motherhood, unless you count chasing after a toddler whose intent on pulling the vacuum down on top of him.

I realized that having no public acknowledgement for the hard work I was providing was beginning to wear on me. My husband would give me much needed praise but he wasn't, and couldn't, be there for all my small nuances of motherhood genius and disaster. I was craving the straightforward reward-for-service that is the tipping pool in a bar. My toddler, despite his many winning attributes, does not yet have the monetary prowess to tip his mama 20% for services rendered. I got in contact with my old tiki bar, and mentioned that if they somehow had a single shift open up, I'd be more than happy to take it.

They did, and I agreed to come back on Mondays. That was the best decision I could have made. I'm still not sleeping much; this motherhood gig is a full-time job to be sure. However, one night a week is perfect, because though I don't get home until two a.m. some nights, and then have to roll into the early next day as a SAHM, I feel as if a part of my self has been replenished. Admittedly, my job is more fun than the average service job. I set drinks on fire, make them explode, and trigger rain storms and volcano eruptions throughout the night. The hours are long, my feet hurt afterwards, but I'm socially satiated and it makes me a better mother, wife, and human by allowing myself that outlet.

I consider this move back to a solitary shift to be self-care. I am working, it isn't always easy, but I am allowing myself to get dressed up in tiki wear, slap some plastic flowers in my hair, wear actual makeup. I get to chat with a bunch of adults about the mysteries of alcoholic concoctions with beautiful, fragrant, cheeky garnishes and these adults can chat back at me (no offense to my toddler, but sometimes it's nice to not have to hold up both ends of the conversation). I am making some money again, which though it isn't nearly as much as I was bringing into the household before I had my baby, it's enough to let me pay off my student loans with my tips which is a huge help and gives me some ownership in our allocation of finances. Additionally, my husband has a full night with our son which gives them bonding time and also gives me a break from having to do the nighttime routine as well as at least one of the late night wake ups.

It doesn't always work this way; I understand it's a luxury and I'm incredibly lucky that my old job switched some things around to provide me with this perfect schedule. I am, however, allowing myself to really enjoy it. As humans, we have many facets, and sometimes those facets get forgotten in the shifting of motherhood. It's important to find an outlet for those parts of you. It may not be easy, it may not happen right away, but finding your occasional opportunity to acknowledge your old self, is both encouraged and celebrated. Treat yo self, mamas.

5 Powerful ways to embrace your fourth...

Autumn Bettinger is an outdoor-minded momma with a toddler and a lot to learn. She started writing about her experiences as a way to connect to other mothers and inspire them and their kids to get outdoors. Her blog has since evolved into writings about the day-to-day mom life with sprinkles of environmental education. Turns out, she was going to be an incredibly ambitious backpacking mother... before she had a baby. Now it's everything she can do to keep her son from stuffing leaves in his mouth on walks through the dog park.